Tara Boyle thought she knew where her life was taking her, but then Sonny’s BBQ entered the picture 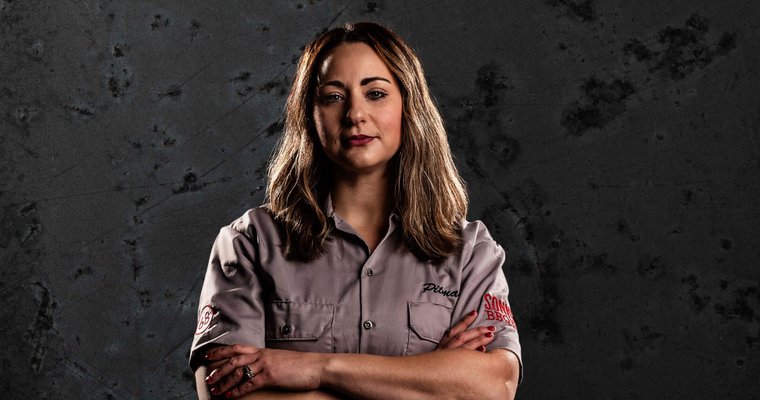 Tara Boyle, pitmaster and directorof Operations for West Coast BBQ LLC, oversees three Florida-area Sonny’s Barbecue locations. Provided
Oct. 18, 2021 | by Dan Hyman
Tara Boyle had long wanted to be a hairdresser. To her, it was a no-brainer: For as long as she could remember, hair was her passion. Life, however, has a funny way of throwing us curveballs. And for Boyle, hers ultimately led her into the wild world of barbecue.
“Honestly, I’m so glad it all happened the way it did,” said the pitmaster and director of Operations for West Coast BBQ LLC, who oversees three Florida-area Sonny’s Barbecue locations. “It really all kind of just fell into my lap.”

To hear her tell it, Sonny’s became an integral part of her life when she was least expecting it. In 2008, Boyle took a job at the barbecue chain on a simple whim — her friend had told her how great of a company it was, and plus, she could work there part-time while finishing hair school. To that end, she started as a server but quickly got asked to be a manager. She laughs at the memory.
“I was honestly a terrible server so I really don’t know what made them ask me to be a manager,” she said.
But, as Boyle explained, she and the welcoming culture at Sonny’s BBQ were instantly a perfect match. She quickly felt what so many of her co-workers would come to tell her about the barbecue chain: Sonny’s BBQ is a true family.
When graduation time came then from cosmetology school, Boyle’s mind was already made up: she was staying at Sonny’s BBQ for the long haul.
“Because I never wanted to leave the people,” she said. “Our stores had created a family for me. They’re a place where everyone cares about you. And really, it’s what’s kept me there for 13 years.”
Over the past decade-plus, Boyle has risen up the ranks at Sonny’s BBQ: she’s advanced from manager to general manager to area supervisor and beyond. And while she loves her job as a certified pitmaster, it’s the support system that Sonny’s BBQ provides that has inspired her over the years
Not to mention the great work in the community that Sonny’s helps facilitate: for seven years, Boyle has been at the forefront of BBQ To The Rescue, a local charitable effort she launched as an extension of Sonny’s Random Acts of Barbecue initiative that delivers food, via a dedicated food truck, to those in need. Couple this with the fact that Sonny’s is always involved with the local community, and it’s no surprise the restaurant chain recently awarded her with its Legacy Leadership Award at its annual summer convention.
“We have so many customers that are like family,” Boyle said. “So it becomes about: what can we do to help this person or this organization that is near and dear to you? If I didn’t have the support from Sonny’s BBQ over all these years I wouldn’t still be here.
Specifically, Boyle said, during the past year — and particularly during the pandemic “there were times where things got incredibly tough and the Sonny’s BBQ team would always check in on me. They made it a point to let me know how much I was cared for.
“In reality, I turned to them more than my actual family. Sonny’s BBQ truly got me through last year. Because they understood what I was going through.”
What’s also been rewarding about Boyle’s time at Sonny’s BBQ is that she’s one of the few prominent females in a largely male-dominated barbecue industry.
“Sonny’s BBQ makes me feel even more special because it’s rare for a woman to be in this position,” she said. “Like, “Wow, this girl can smoke barbecue and run a restaurant. They’re super inclusive.”
When asked to describe her experience being a pitmaster at Sonny’s BBQ — the end result of an intense training program that turns barbecue novices into seasoned pros who are experts in all things meats, smokers, and sauces — Boyle said it represented “the icing on the cake” for her experience at Sonny’s BBQ.
“Because I have a passion for Sonny’s BBQ and want to represent the brand in the best way possible,” she said. “Being a pitmaster gives me the drive to continue to make the brand better and show people what Sonny’s BBQ is all about.”
Although she admitted that there would always be ups and downs in any profession, being part of the Sonny’s family has sustained her for most of her adult life.
“I just so greatly enjoy the culture and the staff and what Sonny’s BBQ stands for,” she said. “I never thought I’d manage a restaurant. I mean, I didn’t even think I’d be in hospitality, but Sonny’s changed everything.”
Dan is a freelance journalist based in Minneapolis, Minnesota. He has written articles for publications including Rolling Stone, New York Times, Esquire, Playboy, ELLE, GQ, Men’s Journal, NY Mag’s Vulture, The Chicago Tribune and many more.
Subscribe now to the Restaurant Operator Daily, which brings you the top stories from Fast Casual, Pizza Marketplace, and QSR Web.

or register now
Forgot your password?
You may sign into this site using your login credentials
from any of these Networld Media Group sites: