18 tow trucks from Harris Towing and several other companies passed by and tooted their horns to show respect for the first Black tow truck business owner in Delaware.(facebook)
A flatbed tow truck from Harris Towing Group sat silently in front of Bennie Smith Funeral Home in Dover Thursday night, a solemn reminder that Delaware businessman and trailblazer Luke J. Harris Jr. had died at age 76 on Sept. 18.
But it turned out that Mr. Harris wasn’t going out quietly, as around 18 tow trucks from Harris Towing and several other companies passed by and tooted their horns to show respect for the first Black tow truck business owner in Delaware.
“He did it for a long time,” said Jon Harris, one of Mr. Harris’ four sons. “He’s probably one of the senior tow companies in the area and at one point was the biggest towing company in Kent County.
“It’s difficult, and we’re going to miss him. He’s left a legacy for us.”
The late Mr. Harris’ story is an incredible one, which saw him transition from a 20-year career in the U.S. Air Force _ he retired as a master sergeant in 1985 after his second stint at Dover Air Force Base _ before hitting the books at Delaware Technical Community College and starting his own business.
His sons, Jon, Michael, Joseph and Luke Anthony, were all trained in the towing business, and all worked for his company at one point.
Michael remembers his father as someone who would sacrifice anything he could to give a hand-up to others.
“Just the simple fact that he was kind of like a trailblazer for people to see him and start a business,” he said. “He sacrificed a lot for us and for my mom,” he said of Miriam Celestine Spellman, whom Mr. Harris married in 1967.
“I don’t know if a lot of people know this, but he helped her start her business, which was a beauty school and beauty salon. And then, after he retired (from the Air Force), he started his own business. He started with one truck and a dream, and it took off from there.”
Son Jon said it was like his father wasn’t sure what to do with himself after he retired from the Air Force, so he started to write the next chapter of his life.
“He started wrenching out in the yard, and he went back to school at Delaware Tech to get his certification,” he said. “After that, he started his auto-repair business.
“Then, what happened was, he needed to get a tow truck to move the cars to get to him (for repair), and it kind of transitioned from auto repairs to towing/auto repairs.”
It was like everything just fell into place. Over time, he eventually grew from that first tow truck to a fleet of nine.
It took time and a lot of hard work and determination, but he went on to leave his mark as a businessman in Kent County, with Harris Towing Group at 5360 N. DuPont Highway, just outside of Cheswold.
He secured contracts with the Dover Police Department, the Delaware State Police and the Dover Post Office. He was known to be one of the hardest-working drivers around.
Luke Harris was very appreciative to the other tow truck operators who came out to pay their respects to his father Thursday.
“I wouldn’t miss this for the world,” he said. “My dad is my hero, and he’s a legend in my book. The man taught me everything I know. He’s a great man, and he was willing to help anybody and everybody.”
Jon said a lot of people will never know that.
He told a story of how another prospective tow operator came calling on his father to get advice on starting his own business.
Jon laughed and said he told his father not to offer any advice to him because that person could eventually become his competition.
It didn’t matter to the elder Harris, a man who was always willing to help others.
“He made a lot of other people realize that they can go out and start their own business, especially in the Black community, where a lot of people don’t realize that they could be entrepreneurs,” Jon said.
“Those are some big shoes, and we’ve all (he and his brothers) got to fill them. I can’t do it by myself. We always collectively talk about things, and we’ve all worked for the company for a while.”
Many tributes came in praising Mr. Harris on Bennie Smith’s memorial page.
“Luke was my first Shift Chief when I arrived in August 1981 at Dover AFB,” Tim Hahn wrote. “Luke drove the Sierra 7 truck on Swings, and after retirement owned a gas station and towing service (Harris Towing) located directly across the street on what was once (U.S.) 113.
“When I was (vice president) at Marydel-Hartly Little League in 2010 he sponsored a team. He surprised the kids by putting them on one of his flatbed rollbacks for the opening-day parade. I knew him to be a kind man! RIP Luke, I will miss our chats.”
Sally Richardson Nichols also remembered Mr. Harris as a man with a good heart.
“Mr. Harris will be admired tremendously by many of us in the community for his kindness and professional manner of dealing with his customers for many years through Harris Towing Services,” Ms. Richardson Nichols wrote. “This head of this good business and great family had a kind heart. God bless the family and business. I remember how the business and family supported us at Faith Elementary School. Many thanks and honor.”
Stay up to date by getting the latest LA Sentinel News and Alerts sent to your email inbox.


Your privacy is important to us. You may unsubscribe anytime via the link found at the bottom of each email we send. 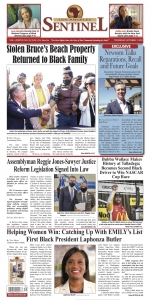 LA Sentinel
in your pocket:


Stay up to date by getting the latest LA Sentinel News and Alerts sent to your email inbox.


Your privacy is important to us. You may unsubscribe anytime via the link found at the bottom of each email we send.
Close / I’m already on the list

Don’t be limited anymore! Subscribe Now »
** Existing subscribers, please Login / Register for Digital »
Subscribe to The Los Angeles Sentinel for only $3.99 per month, with 1 month free!

Relax in comfort each week as you read the printed newspaper on your own time, delivered weekly to your home or office. This subscription also includes UNLIMITED DIGITAL ACCESS for all of your devices. Includes FREE shipping! One easy payment of $3.99/month gets you: