Progress around the globe with mass vaccinations has played a major part in enabling the world to rapidly return to a normalised existence.
In South Africa’s case, a sharp decline in the number of new Covid infections occurred during October, with the seven-day average declining from 1,500 at the end of September to only 349. This is the lowest level since 4 May 2020 and has allowed the hospitality industry to start recovering from the fairly stringent lockdown regulations that had been in place until September.
The curfew has now been eased, alcohol sales are allowed during normal business hours, and conferences and other events are taking place again (subject to capacity limits).
Furthermore, the decision by Britain to remove South Africa (with 46 other countries) from a so-called red list, has been met with relief and excitement over the prospects for a surge in international tourist arrivals this summer.
The early evidence is promising. British Airways, Virgin Atlantic, Lufthansa, Air France and Swiss-based Edelweiss Air have all resumed flights to Cape Town, which is South Africa’s premier tourist destination. 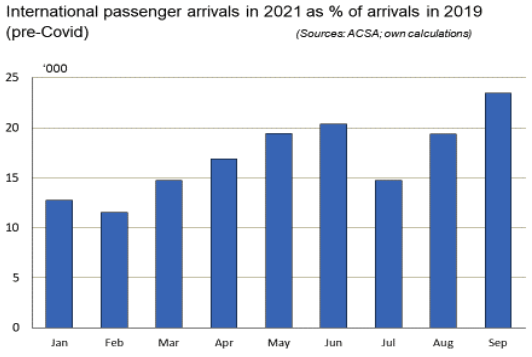 During September, more than 93,000 international visitors arrived at Johannesburg’s international airport, representing an increase of almost 50% over the number recorded in July. Due to the virtual cessation of international travel during the height of the pandemic, it makes more sense to compare data for 2021 with 2019 (pre-Covid), a practice that is also followed by the International Air Travel Association (IATA).
Although the September figure is still a far cry from the 400,000 international visitors that arrived two years earlier, it represents a recovery rate of close to 25% — good news for South African hotels, restaurants and guest lodges, all of which may return to profitability during the traditional bumper summer season.
Many hotels that had been “mothballed” since April last year will now reopen, including most of the hotels in the Sun International Group and the Commodore Hotel in Cape Town, which has been scheduled for reopening on 17 November.
Positive policy response required
Hopefully, the authorities involved with the tourism supply chain will grasp the opportunity to make the most of the imminent resurgence of international tourism. As early as 2006, with the launch of the Accelerated and Shared Growth Initiative for South Africa (AsgiSA), the government acknowledged the vital role that tourism can play in the quest for higher growth and employment creation.
Unfortunately, significant damage was caused to the lofty ideals of a concerted tourism strategy during the Zuma administration, particularly by a former Minister of Home Affairs, Malusi Gigaba, who enacted legislation that imposed onerous visa regulations on tourists visiting the country.
Although a measure of relaxation has since been implemented, substantial scope exists for further amendments aimed at a regulatory system for visas that is more conducive to attracting tourists.
The reality is that international tourism is a highly competitive industry and most countries around the globe are desperate to revive tourism sector activity. The message to the government should be clear: A proactive tourism strategy should be prepared post haste, involving all the relevant stakeholders, with a strong focus on pragmatism and the removal of unnecessary obstacles to growth.
A starting point would be to establish a common slogan of “first impressions count”. All the public sector agencies involved with tourism should be educated about the importance of ensuring that visitors from abroad would like to return again in future and also influence friends and relatives to visit South Africa.
The “Welcome Campaign” that was initiated as far back as 1999 should be reinvigorated and home affairs officials at the ports of entry should be carefully selected and trained to make arriving tourists feel grateful for the trouble, time and expense of a trip to South Africa.
South Africa is a tourist paradise, offering endless opportunities to explore the outdoors via sport and adventure activities, while also possessing accommodation facilities of the highest possible standards. The country is one of only 17 in the world classified as megadiverse.
Several of the sub-sectors of the hospitality industry are highly labour-intensive. If the government is serious about employment creation, it should prepare a “master plan” for tourism as a matter of urgency — one that accommodates the recommendations of the private sector. BM/DM
Dr Roelof Botha is Economic Adviser to the Optimum Group.
Please note you must be a Maverick Insider to comment. Sign up here or sign in if you are already an Insider.
Everybody has an opinion but not everyone has the knowledge and the experience to contribute meaningfully to a discussion. That’s what we want from our members. Help us learn with your expertise and insights on articles that we publish. We encourage different, respectful viewpoints to further our understanding of the world. View our comments policy here.
No Comments, yet
Daily Maverick © All rights reserved
There are many great benefits to being a Maverick Insider. Removing advertising from your browsing experience is one of them – we don’t just block ads, we redesign our pages to look smarter and load faster.
Click here to see other benefits and to sign-up to our reader community supporting quality, independent journalism.
Select which newsletters you’d like to receive