By Industry October 22, 2021 4:20 PM
By Industry | October 22, 2021 4:20 PM ET
The Skip Barber Race Series wrapped up its season this past weekend at Indianapolis Motor Speedway. The championship came down to the final round as last year’s champion Johnny Guindi led going into the weekend with rookie hot shoe Jeshua Alianell only 64 points behind. Varying weather conditions kept all 10 drivers in the field on their toes throughout the weekend.
Weather held off for the two qualifying sessions as pavement oval and open-wheel racer Nathan Byrd swept both sessions with times of 1m46.353s in the first session and 1m46.501s in the second session. Seth Brown returned to the race series with speed, qualifying runner-up in both sessions and only 0.045s off Byrd’s time in the second qualifying session. Alianell rounded out the podium in both qualifying sessions. 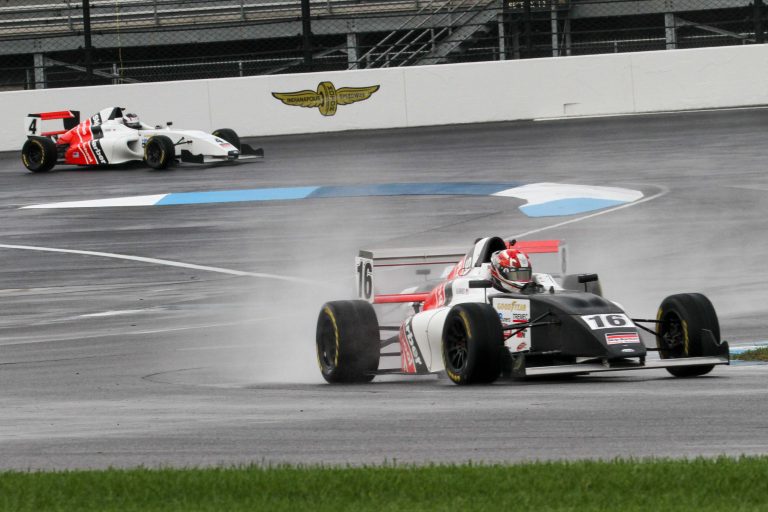 Wet tires were mounted to the formula cars for Race 1 after morning rainfall dampened the track. Byrd led the field through the first set of corners until he made a mistake at the end of Hulman Boulevard causing him to miss the corner and come into the pits early in the race. The lead would be relinquished to fourth-place qualifier William Lambros. Alianell passed Brown in the first lap as well, taking over the second-place spot. Alianell pushed hard to catch Lambros but wasn’t able to seal the deal as Lambros would claim the win in Race 1. Bobby Krug maintained a solid consistent pace and worked his way up from seventh place to the final podium position.
The track dried up for the final race of the 2021 season. Going into Race 2, Alianell was in a must-win situation to make up the points deficit on Guindi. At the drop of the green flag, the Top 4 went 4-wide as they all were going for the top spot into turn 1 but Alianell got to the lead as polesitter Byrd went back to fourth. Brown began to work his way up to battle Alianell as he passed Lambros for third. Meanwhile, Nathan Byrd began to run the fastest lap times and make his way back to the front. Little by little, Byrd was able to make passes and eventually chased down Alianell and passed him for the lead. As the laps ended, Brown was also able to work around Alianell as Alianell’s championship hopes faded. Byrdman claimed his redemption win in Race 2 after his Race 1 mistake the day before; Brown and Alianell held on to their podium positions.
Guindi finishes the season with 318 points and becomes a two-time Skip Barber Race Series champion after beating Alianell by 2 points. Byrd finished third in the final points standings with 294 points. Jimmy Dai and William Lambros round out the Top 5 in the final points standings. Check out the rest of the final points standings by clicking here and learn more about the Skip Barber Race Series by clicking here.
Skip Barber Racing School
Down to business: How an SBRS Corporate Event can re-energize your team
Guindi, Alianell win at Mid-Ohio
Guindi leads hard-fought Skip Barber Formula Series with two rounds to go
October 26, 2021 4:31 PM ET · By: Marshall Pruett
Juncos Hollinger Racing and Carlin Racing are discussing whether a collaboration between the single-car teams might be in their best (…)
October 26, 2021 2:52 PM ET · By: Chris Medland
McLaren’s program of testing multiple drivers in its IndyCar is set to continue with its former Formula 1 driver Stoffel Vandoorne in the (…)
October 26, 2021 2:12 PM ET · By: RACER Staff
Mazda Motorsports has announced the recipients of its three Idemitsu Mazda MX-5 Cup presented by BFGoodrich Tires scholarships and the two (…)
October 26, 2021 2:11 PM ET · By: Kelly Crandall
For some sports fans, a piece of game-used memorabilia can be hard to come by, or an expensive investment. In NASCAR however, it is not (…)
October 26, 2021 12:50 PM ET · By: Marshall Pruett
Team Penske will not seek to keep its former No. 22 Chevy entry piloted by Simon Pagenaud in motion with a different driver next (…)
October 26, 2021 12:30 PM ET · By: Chris Medland
Daniel Ricciardo described the United States Grand Prix weekend as “overwhelming” as he finished fifth in front of a weekend crowd of (…)
October 26, 2021 12:11 PM ET · By: Chris Medland
Max Verstappen’s victory in the United States Grand Prix feels particularly significant as it came at a traditionally strong Lewis (…)
October 26, 2021 10:45 AM ET · By: Ryan Kish
For outsiders, a driver retiring from what is viewed as a video game series may seem strange. For the drivers in the eNASCAR Coca-Cola (…)
October 26, 2021 10:34 AM ET · By: Marshall Pruett
David Malukas was giddy after getting his first taste of NTT IndyCar Series power and downforce on Monday. The Indy Lights championship (…)
October 26, 2021 8:30 AM ET · By: HSR
Veteran Historic Sportscar Racing (HSR) competitor Jack Lewis celebrates 50 years of racing success at Daytona International (…)
Hulkenberg interest validates IndyCar, AMSP – Kiel
October 25, 2021
Leclerc believes Ferrari had the pace for a COTA podium
October 25, 2021
Alonso says ‘random’ rules did U.S. fans a disservice
October 25, 2021
VIDEO: Hulkenberg’s first IndyCar test with Arrow McLaren SP
October 25, 2021
PRUETT: Shank, Swans and a soldier
October 25, 2021

All contents copyright © 2021, Racer Media & Marketing, Inc. All rights reserved. This material may not be published, broadcast, rewritten or redistributed in any form without prior authorization. Your use of this website constitutes acceptance of our Privacy Policy and Terms & Conditions. Racer Media & Marketing, Inc., 17030 Red Hill Avenue, Irvine, CA 92614, 949.417.6700 Partner of USA Today Sports Digital Properties
Powered by WordPress VIP